The rise and demise of Scotland’s historic slate industry

So many of our traditional buildings in Scotland are roofed in slate. Scotland used to have a huge slate industry, but its production had all but ceased by the 1960s.

But what made Scottish slate so popular? What it was like to work in the slate industry? And why did such a thriving industry decline so rapidly? Read on to find out…

The final straw for thatch 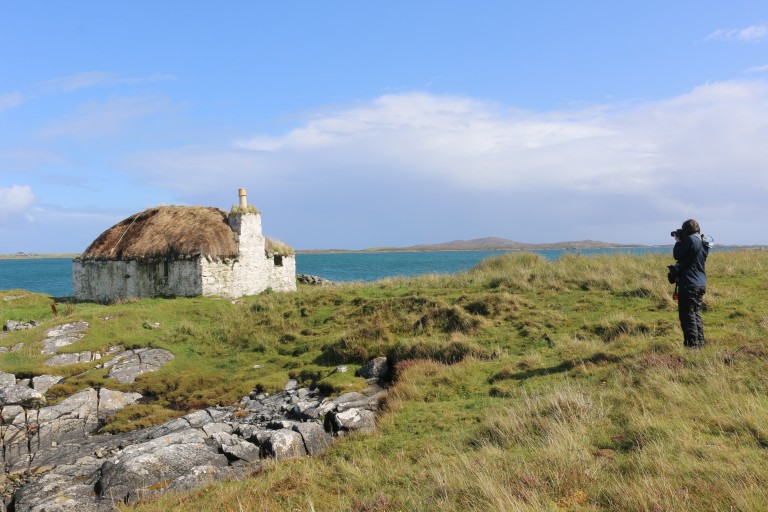 A thatched cottage on the Scottish island of Benbecula.

Traditionally, Scottish buildings were roofed with thatch, which was a material that was easy to get hold of wherever you lived in the country.

Opinions on thatch began to change in big cities after numerous fires, and thatch was finally banned in London in 1212 after the Great Fire of Southwark. Cities and towns began to insist new builds be stable, permanent and fire-safe, and in 1621 Edinburgh also banned the use of thatch.

Following these regulations, thatch began to disappear from many larger burghs and towns throughout Scotland in the 17th and 18th centuries and building tradition evolved which saw a trend towards nonflammable materials like brick and slate.

The slate industry boomed, and slate quarrying became one of Scotland’s most significant industries throughout the 18th, 19th and early 20th centuries. At one point there were over 80 quarries producing roofing slate in Scotland. 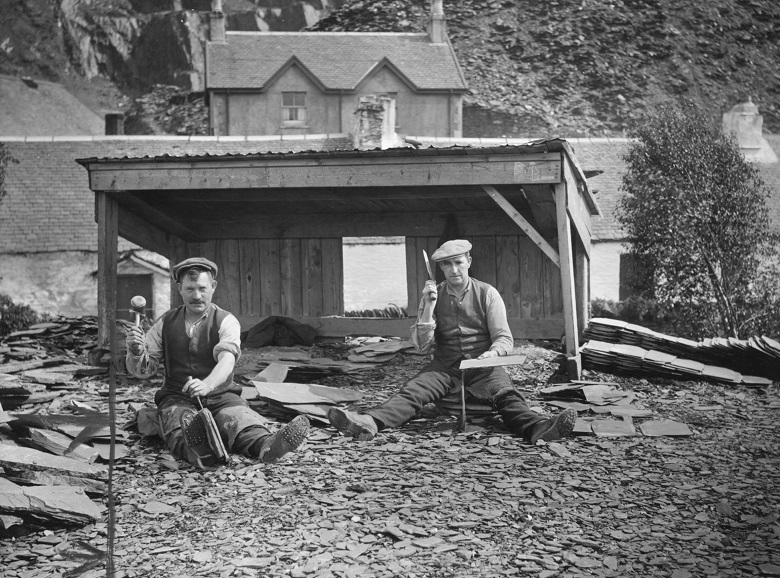 In the 18th century Easdale and the adjacent “slate islands” of Belnahua, Seil and Luing were the centre of the Scottish slate industry. Working in the slate quarries was a tough job. The men worked in teams of five or six: two quarriers, two splitters and trimmers and two labourers. Slate was removed from the foreshore by placing hardwood wedges in the natural cracks in the slate at low tide. As the tide rose, the wedges would swell, and this would widen the cracks and break the rock out into more manageable sizes for splitting after several tides.

Gun powder was also used to break out the rock by drilling holes into the shear face, but blasting was kept to a minimum because too much would shatter the slate. In the earlier days, the women and children of the islands would carry the slates in wicker baskets on their backs from the quarries to the harbour.

The men were paid twice yearly by the thousand slates sold, and, where obliged, had to run up a bill with the company store which was recorded on a slate, hence the term ‘put it on the slate’. 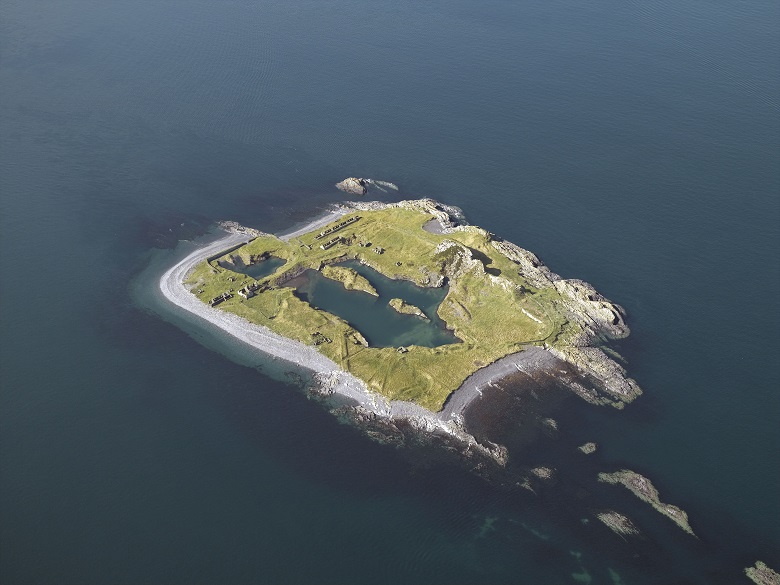 The Island of Belnahua with the remains of slate quarries.

In the 1790’s the Stevenson Brothers took a lease out on the Island of Belnahua aiming to supply slate for the new town of Oban. A small village was constructed on Belnahua with cottages for workers and a school. The island had a population of nearly 200 at its peak. The island was so small and areas of fertile ground were so limited that everything the islanders needed had to be brought over by boat from Luing, even barrels of fresh drinking water. 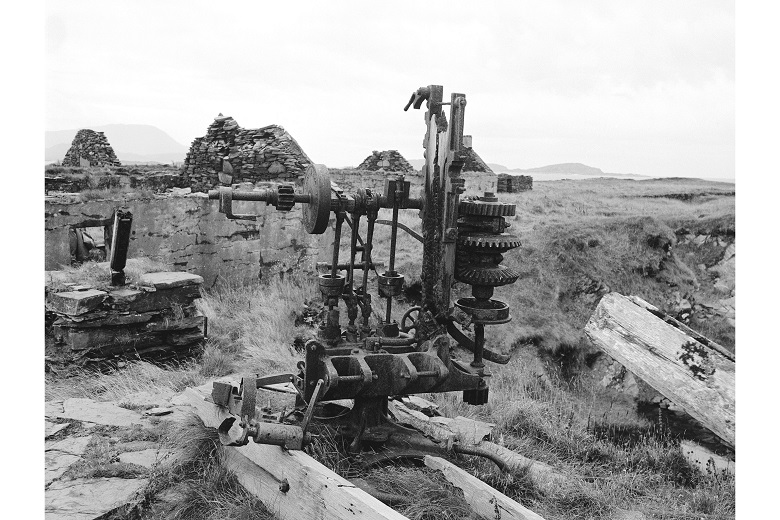 Quarrying here stopped almost overnight in 1914 when the workforce went off to war. The village was left abandoned, as women and children retired to Luing or elsewhere. The quarry is currently flooded and the village that once thrived is a ghost town. Many of the quarriers’ cottages are left as roofless ruins and machinery is scattered across the island.

The ruinous buildings and flooded quarry on the Isle of Belnahua is a testament to the great industry that once thrived there.

The peak and decline of the slate industry 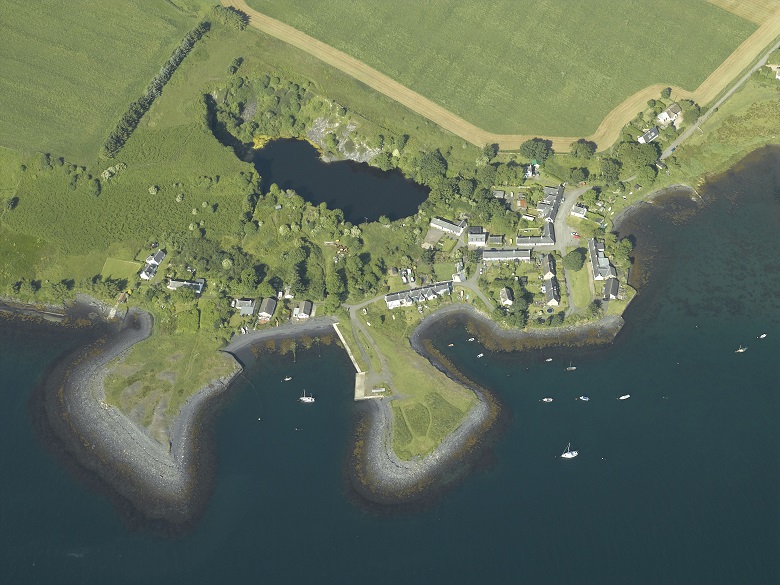 The village of Toberonochy, Luing, with the remains of the slate quarry next door.

Slate production in Scotland peaked towards the end of the 19th century, in 1896, when 45,000 tonnes were produced – this is around 45 million slates!

The market for Scottish slate diminished with the import of cheaper slate from Spain and machine-cut Welsh slate. Clay tiles entered the market which could be produced in many colours and was much cheaper than slate (although with a short lifespan to match). So slate production started to decline, and by 1910 (around 15 years after the peak) it had almost halved.

During World War I slate production in Scotland had all but stopped for several years, picking up slowly in the years that followed the war, but it never again reached the levels of the days before the war. Slate production then completely ceased, with the closure of Ballachulish quarry in 1955, followed by the closure of the last remaining quarries in the 1960s.

Ultimately, its high cost, a lack of investment, a shortage of labour after two world wars, and the popularity of imported materials led to the demise of Scottish slate. 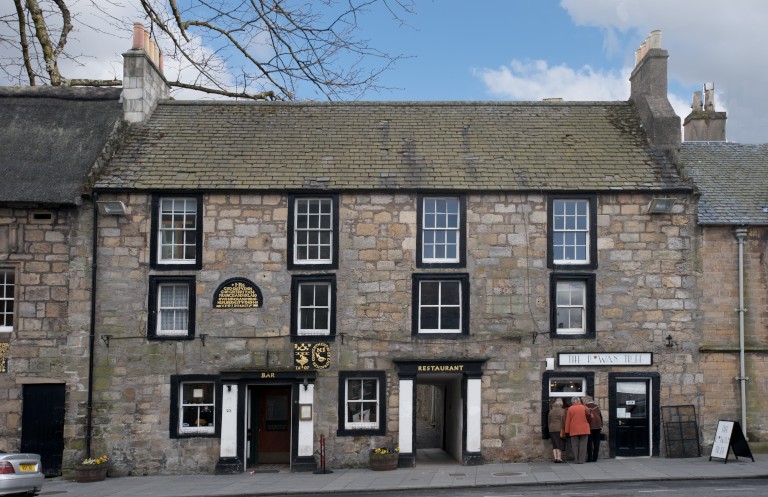 The fact that so many buildings in Scotland are still roofed with Scottish slate even though all the quarries completely shut down by the 1960s truly is a testament to the strength and longevity of the material. Many slate roofs have lasted over 100 years and they are still holding strong.

Looking after slate is all the more important since the material hasn’t been quarried in Scotland for many years. Supplies for replacement purposes are very limited and so it’s best to reuse slates wherever possible.

Learn more about Scotland’s slate quarries and discover how slate varies across the country in our Slate Tour of Scotland blog.

Discover more about slate as a building material and get maintenance and repair advice for slate roofs.

Natalie is a Traditional Building Materials trainee with a focus on stone and slate. She has a degree in Geology from the University of Glasgow and loves exploring Scotland’s natural landscapes.
View all posts by Natalie Bushell