Binding with earth: what we know about earth mortars in Scotland 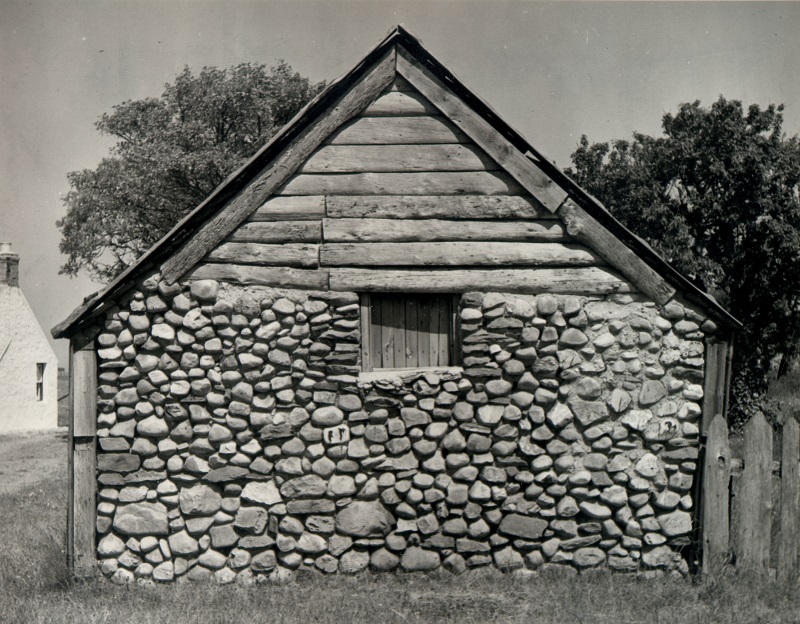 Building with earth mortar is a tradition that’s over 5,000 years old. So why do we know so little about this material, and how to use it, today? Traditional Skills and Materials Project Manager, Graham Briggs, is here to help you find out more.

A historic skill and material

While lime is generally considered to be the most common mortar material for traditional structures in Scotland, there is an older and more established material. For hundreds of years, people built up and passed on skills and knowledge about building with earth.

“Earth mortar has been used since the first masonry buildings were built in Scotland and up until the 19th century. A tradition encompassing some 5,500 years that transcends cultural eras, building typologies and extends beyond the end of vernacular procurement.”

Earth was commonly used as a bedding mortar to bind and fill gaps between blocks of stone. Building with earth mortars in this way isn’t unique to Scotland. In fact, structures made with earth can be found all over the world. Earth was – and still is – a cheap, low technology, user-friendly material to build with. In many cases, earth was sourced locally. Often, material that was dug out for a building’s foundations was then used as earth mortar. The type of earth used varied across regions and variations in local stone also played an important role in how earth mortars were applied.

Given that 9% of dwellings have been built pre-1919, we can safely assume that there will be many people living in buildings using earth mortar today and they might be completely unaware!

Identifying earth mortared buildings can be extremely difficult. Many of these buildings have been repointed with lime (or even cement) and many of them may have a lime harl or render concealing their build up.

To-date, most earth-mortared buildings have been poorly recorded as they’re often overlooked and misclassified. Many medieval buildings are thought to be a dry-stone structure, yet when closely inspected it becomes clear they’ve been built with an earth mortar which has been washed out over centuries. The only way to confirm that it’s an earth mortared structure is to take a look at the core material. 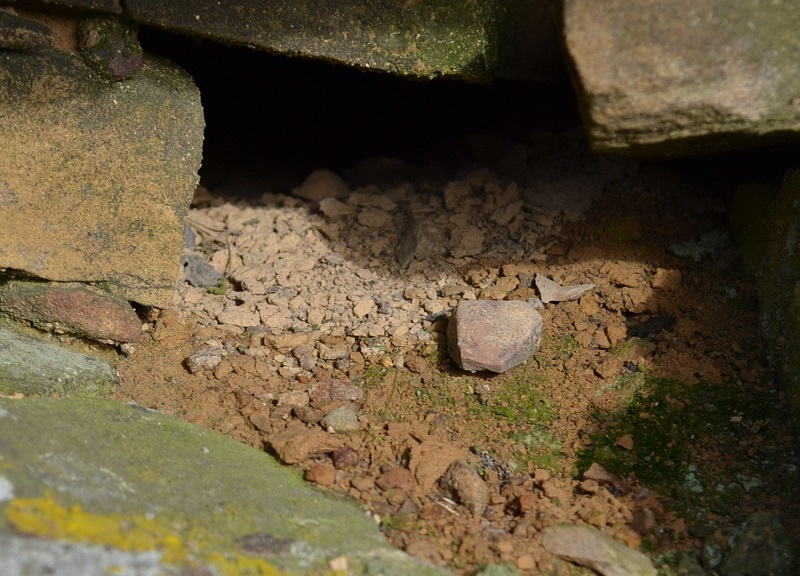 The remains of clay mortar visible in the wall core at Mervinslaw.

“It is very difficult to estimate how many earth mortared buildings there are in Scotland. If we had to guess, that before 1800, 75% of masonry buildings had earth mortar and after 1850 it was 25% and by 1900 it was almost none.” 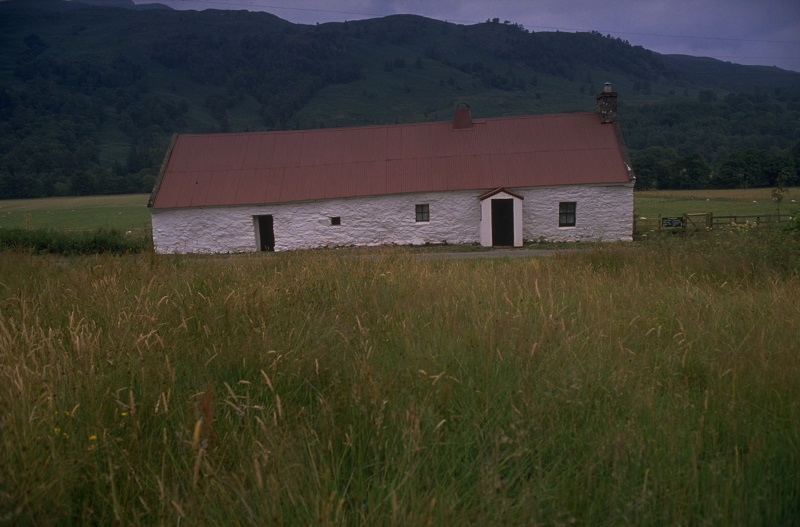 Moirlanich Longhouse is an outstanding example of traditional cruck frame cottage and byre, dating from the mid 19th-century. The building has been little-altered and the walls were constructed with earth mortar. © The National Trust for Scotland. Licensor www.scran.ac.uk.

Why did earth mortar use die out?

We know that earth mortars were used up until the end of the 19th century, especially in areas where clay-rich soils are common. With industrialisation and agricultural improvements in the 18th and 19th centuries in Scotland, a great rebuilding took place. In a short space of time, many buildings that were created using earth mortars were replaced. As transport links improved, materials and access to lime mortar became more readily available. The practice of building with earth mortars diminished to the point where they fell out of use.

The misconception that earth mortars are inferior to other mortars hasn’t helped. Some think they can be weak in tension and vulnerable to exposure from water. But when appropriately maintained with the right materials and skills, buildings with earth mortar can be extremely resilient.

How should we approach the repair of earth mortared structures?

There is a general a lack of understanding and confidence in using earth mortars. There are very few people in Scotland with the skills and expertise to advise on sourcing suitable soils. While earth is everywhere, it’s not sold as a standard building product and not many people know how to assess its properties for suitability for repair and use.

We need to build our knowledge and understanding around the material and how it has been used in the past, so we can learn how best to repair and maintain our earth mortared built heritage. 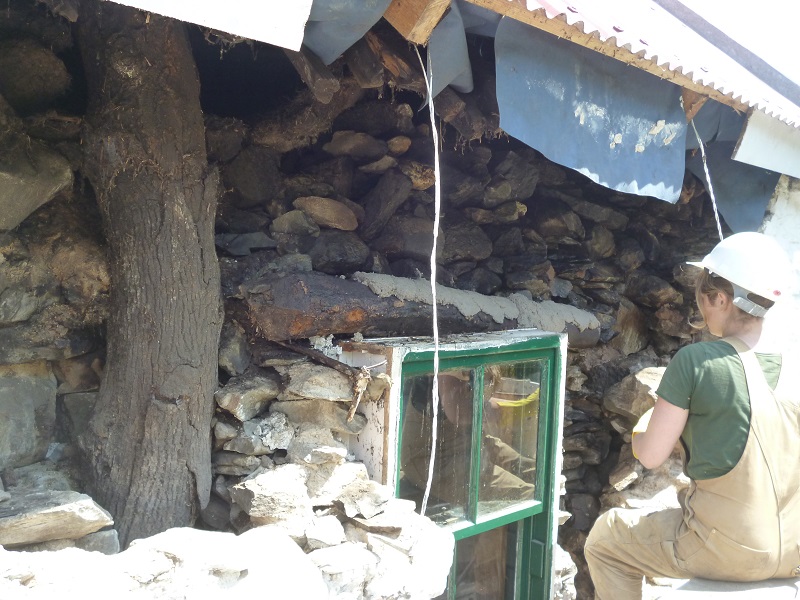 The back face of inner leaf exposed during repairs at Moirlanich, with cruck leg having benefited from the preserving effect of earth mortar drawing away moisture. © Arc Architects Limited

What’s next for earth mortars?

While it’s difficult to imagine a resurgence in this vernacular tradition in Scotland, earth mortars are a significant feature of our historic built environment.

The benefits of earth mortars are clear:

Possibly, but this wouldn’t be without its challenges. So much of what we knew about building with earth mortars has been lost or forgotten. Understanding where to source good material and how to build with it will be amongst the biggest challenges. 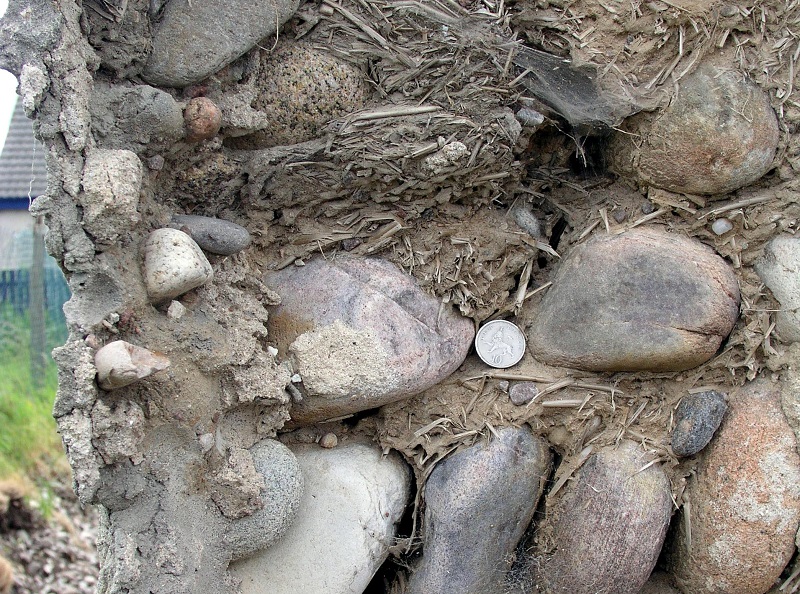 Close up of a wall section from a house in Speybay with a coin for scale. © Chris McGregor

Our five-year materials action plan on Scotland’s earthen materials will build on the knowledge around earth and the use of earthen mortars.

See what we’ve discovered so far, in this knowledge review and research strategy of Scotland’s earth mortars by Arc Architects and RebEarth.

View the Earth Building UK and Ireland GIS map to see the locations of some of Scotland’s known earth mortar buildings.

Find out more about Scotland’s traditional earth and clay buildings in:

Graham Briggs is our Project Manager for Skills and Materials.
View all posts by Graham Briggs