Down to Earth: Scotland’s Earth Building Past and Future 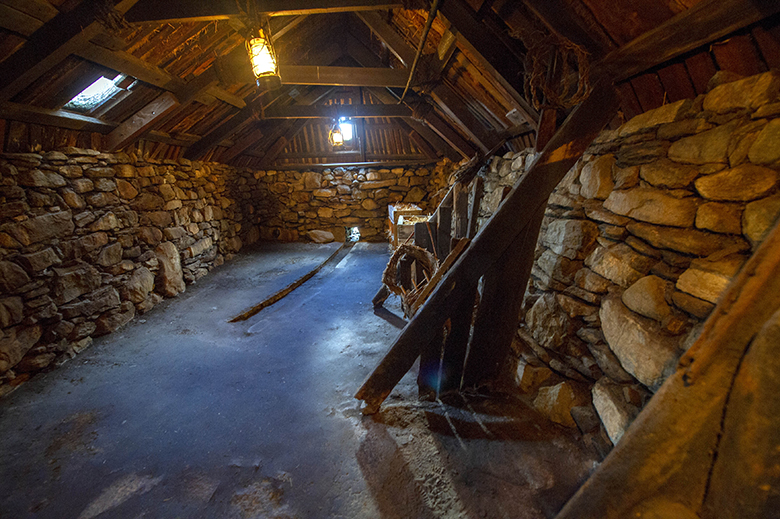 When thinking about Scotland’s historic places, stone might be the first ancient building material that comes to mind.

Scotland’s traditional buildings have been influenced by locally available materials such as sandstone, limestone, granite, schist and other rocks for the last 5,000 years.

But did you know that for the greater part of Scottish history, earth construction was dominant?

For hundreds of years in Scotland, people built up and passed on earth building knowledge. However, by the end of the 20th century, much of this knowledge had been completely lost.

What on earth is earth building?

Earth building is the practice of using materials such as clay, soil or turf to construct a building. It’s a very simple, yet effective, building material.

From the earliest settlements, earth was the predominant building material in Scotland. For many, it was the closest material to hand. The popularity of earth buildings in Scotland varied by region and styles changed to suit the materials available to the local population. 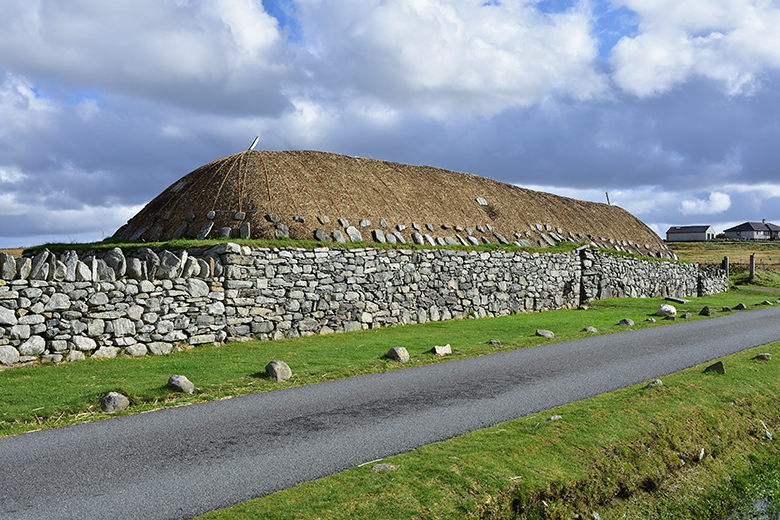 The traditional blackhouse in Arnol was faced with stone and may not appear like a conventional earth house.

Today you might not even realise you’re looking at an earth building! Many traditional earth-built structures are concealed behind a lime harl or stone cladding. 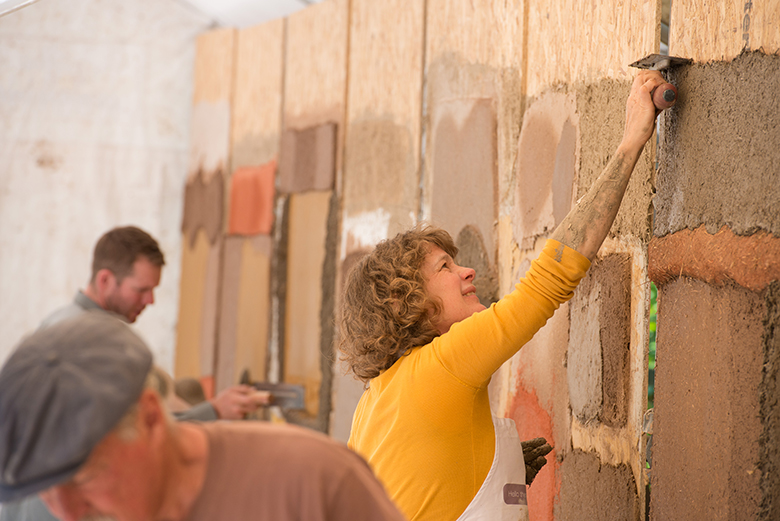 Turf construction uses rectangular cut blocks of earth (known as turves) and was more common on the Western Isles. Building with turf requires experience and knowledge.

Back when turf building was a common construction method in Scotland, there would usually be a master turf builder. This elderly member of the community had a vast wealth of experience and would lead on all turf building projects. They would dictate where to source the turf from, how to cut it and advise whether the turf should be watered or dried out before use.

Earth can also be mixed with straw to form ‘mudwall’ (commonly known as ‘cob’ in the rest of the UK). This was mainly used in Dumfriesshire and the Solway Coast.

‘Clay and bool’ is a type of mudwall with rounded stone boulders set in rows between the earth material and is mostly seen around Spey Bay, Moray. If stones and mudwall are mixed and rammed between timber shuttering this is termed ‘claywall’ (or ‘shuttered clay’ if no stones are mixed in).

There are also numerous stone-built structures that have an earth mortar core often hidden beneath lime pointing or harling.

The decline of earth construction 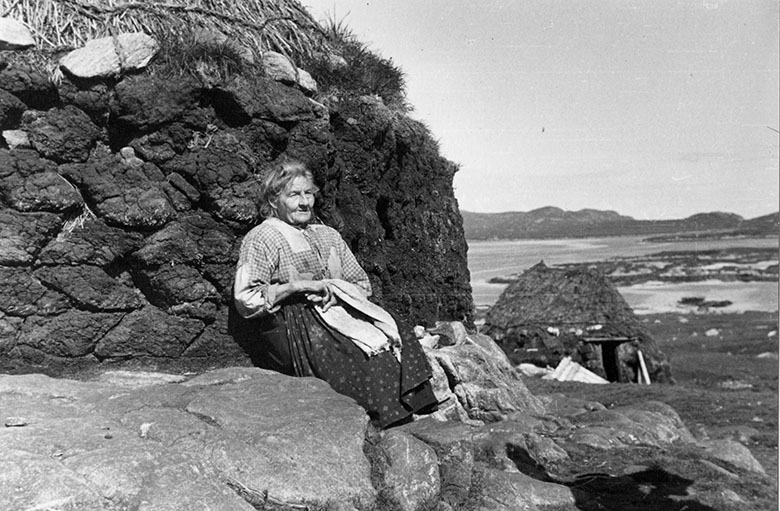 At Loch Eynort on the east side of South Uist, a woman sits on flat rocks enjoying the sun and leaning back against the sloping turf wall of a house.

“Those houses by the roadside which are built of stone are comfortless and dirty; but we peeped into a clay ‘biggin’ that was very ‘’canny’’ and I dare say will be as warm as a swallows nest in winter’’ – Dorothy Wordsworth, 1803

Earth construction in Scotland declined with the industrial revolution, which made stone, cement and brick much easier to access.

Due to the nature of earthen buildings, little archaeological evidence remains. However, the stone foundations of some of these buildings have been found around Scotland. We can also learn a lot about the layout of homes and ways of life in the past from surviving historical descriptions and photographs.

Despite this decline in Scotland, today earth remains the most widely used building material across the world. It’s estimated that around a third of the total human population live in a building made of earth!

The environmental benefits of building with earth 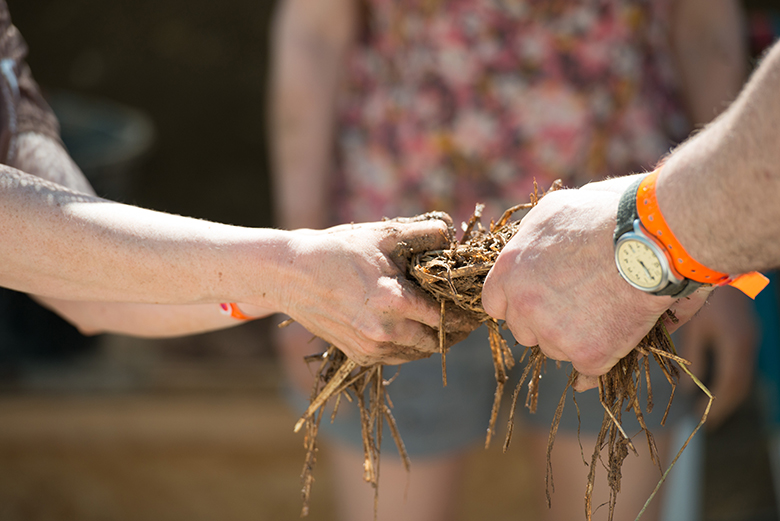 Straw is one environmentally friendly material used in earth building

“Earth is the most basic, and the most ubiquitous building material known to man. It has the benefit of being easily worked, using the simplest of agricultural tools, yet capable of fulfilling the most demanding of roles.” – Bruce Walker, Christopher McGregor and Rebecca Little in Technical Advice Note 6, Earth Structures and Construction in Scotland

Building with earth is an eco-friendly construction method. Building earth walls doesn’t produce nearly the same co2 emissions as manufacturing bricks (which need to be fired in a kiln) or cement (according to research, the cement industry accounts for around 8% of global CO2 emissions).

Typically, when building with earth you can source most of the material locally. This means there is a much smaller carbon footprint associated with transporting building materials. Earth is recyclable too! At the end of an earth building’s lifecycle the material can either be used again in a new building or can be reabsorbed back into the environment.

Might we see a resurgence in Scotland in the future? 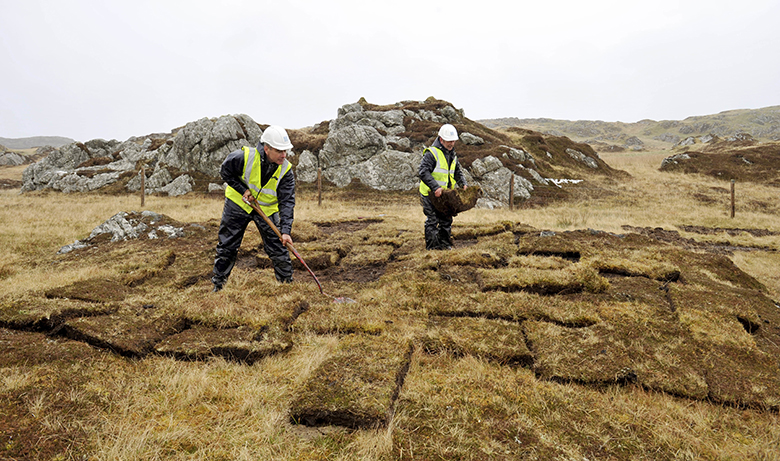 Recognising the impact construction has on our climate, there is a renewed interest in working with sustainable building materials. However, although earth has fantastic environmental credentials, earth construction is considered niche in Scotland today.

There are very few people in the country with the skills and understanding of earth building to bring it back into the mainstream. Yet there are still a number of buildings that require this expertise to preserve and maintain them.

People are also unaware of the environmental benefits of earth building, and some see earth as a building material for the poor. This has hindered the revival of earth building in Scotland for years. But as organisations like Earth Building UK and Ireland promote the benefits of the material, this is changing.

Where to spot earth building in Scotland today

The project is reconstructing a 17th century turf house at the Glencoe Visitor Centre. The reconstruction is based on structures found on archaeological digs in the area and historical research. As well as providing a place for visitors to learn about Scotland’s building history, it’s creating training opportunities for people to get hands-on with earth construction and other traditional building materials. 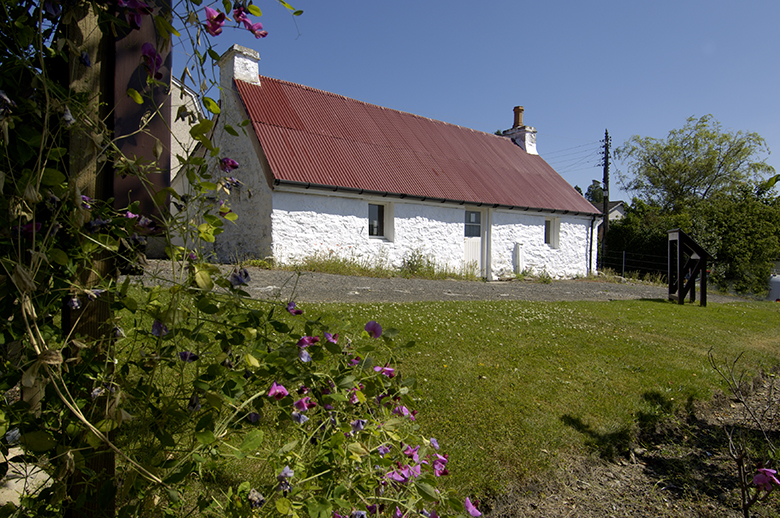 Sunnybrae Cottage in Pitlochry was probably built in the 1700s as a fairly typical byre house. Its walls were probably made of earth mortar, but as time went on were replaced with stone.

You can also see examples of earth building in historic buildings including Arnol Blackhouse and Sunnybrae Cottage.

Discover more about the traditional building skills that made Scotland.

Natalie is a Traditional Building Materials trainee with a focus on stone and slate. She has a degree in Geology from the University of Glasgow and loves exploring Scotland’s natural landscapes.
View all posts by Natalie Bushell