What is Gothic architecture? A Scotland spotters guide 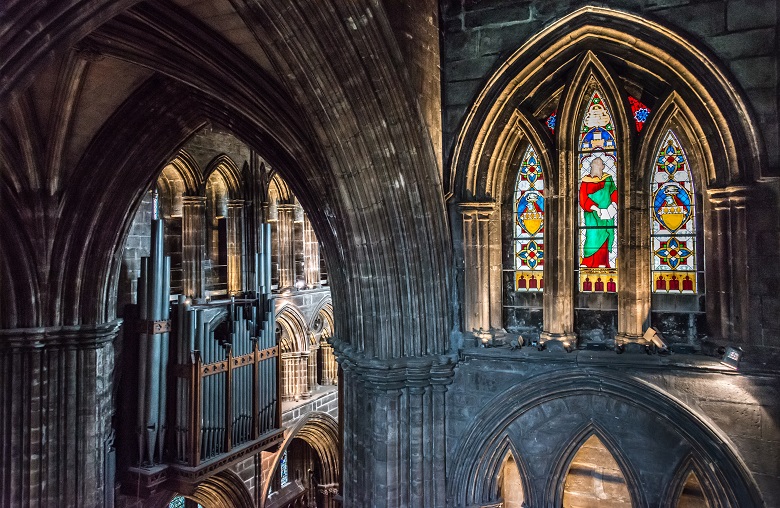 When you think of Scotland’s historic buildings, you might think of ruinous abbeys with massive archways, or towering spires in the sky. You might imagine elaborate carvings in the stone of mansion houses, or cavernous spaces inside cathedrals.

Gothic architecture started in Europe in the 1100s, and was especially popular in France. The Notre-Dame de Paris cathedral (meaning ‘Our Lady of Paris’) is one of the most famous examples of the French Gothic style.

Gothic architecture wasn’t as popular in Scotland as it was in England. During the medieval period, Scotland’s buildings were mostly a mix of:

Victorian Scots, however, loved the Gothic style, and there was a strong neo-Gothic movement in the 18th and 19th centuries. Scotland still has plenty examples of gothic buildings today, if you know what to look for. 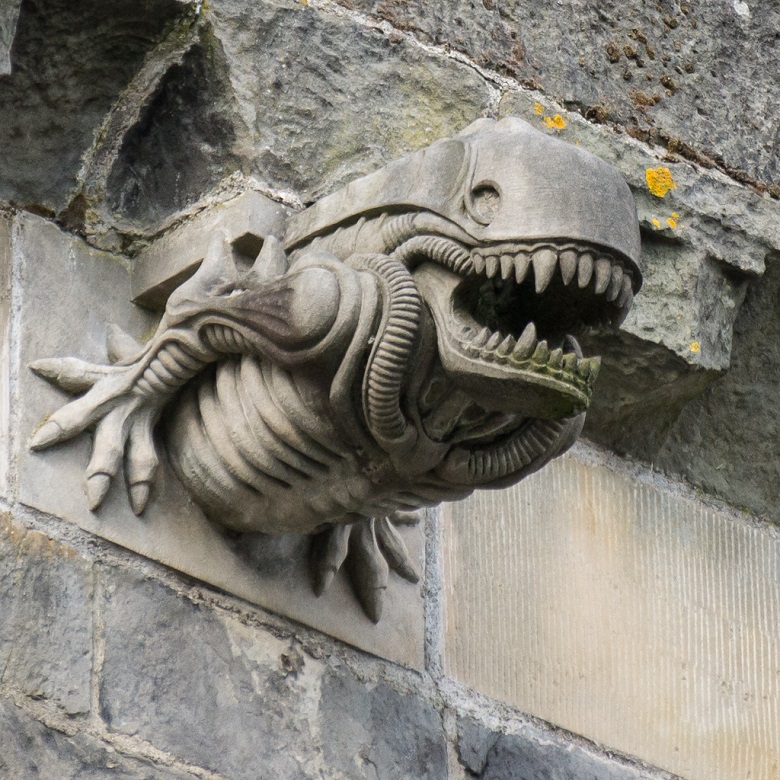 Gothic architecture is full of decorative carvings and ornamentation. Stonemasons carved elaborate designs in all kinds of spaces including statues halfway up enormous pillars (known as statue columns).

Gargoyles are what many people picture when they think about the gothic. They were often carved to look like animals like mythical griffins or dragons, and had fierce, snarling faces.

Other stonemasons gave their buildings a sense of humour. You’ll find a bagpipe-playing pig at Melrose Abbey, or a very familiar figure at Paisley Abbey, were many of the gargoyles were replaced in 1990. 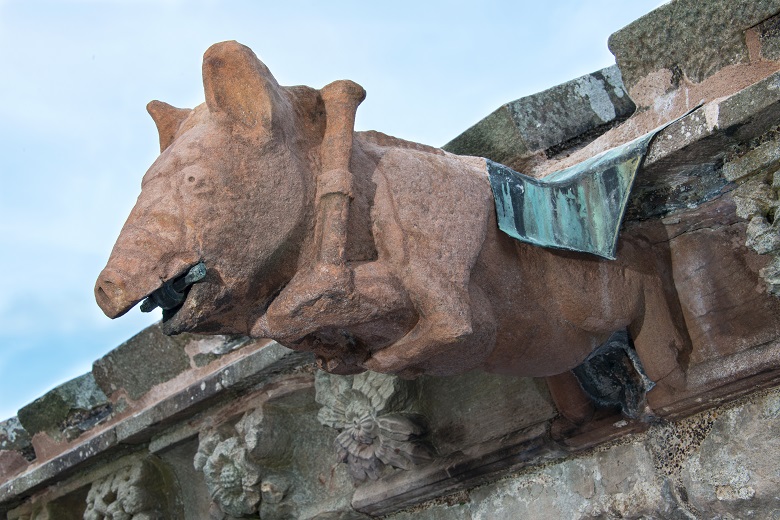 Gargoyle at Melrose Abbey of a pig playing the bagpipes

You usually see gargoyles just below the roofline of a building. Finely carved with brilliant details, they showed off the skill of the stonemasons who made them – but they had a very important job to do. They protected buildings when it rained. They acted like funnels, and the water would go through spouts carved into the gargoyles and pour off the building. This stopped water from soaking into the stonework and collecting on roofs, causing a lot of damage.

Room with a view

Before the medieval period, buildings could be quite dark places. Ceilings were lower and windows were smaller. But gothic architecture was full of big, open spaces, and lots of light.

To let in more light, you need windows. Gothic buildings used higher, pointed archways over windows and doors which made them bigger. They also used something called ‘tracery’ – the stonework you can see between window panes in churches, cathedrals, and other buildings. As the gothic style developed, tracery changed from simple patterns, to elaborate webs of stonework, like you see in rose windows.

Rose windows are large, circular shaped windows, usually found at the top of a gable end. They were especially popular in ecclesiastical buildings like Dryburgh Abbey. Believed to have been inspired by the Roman ‘oculus’, rose windows flooded spaces with light. 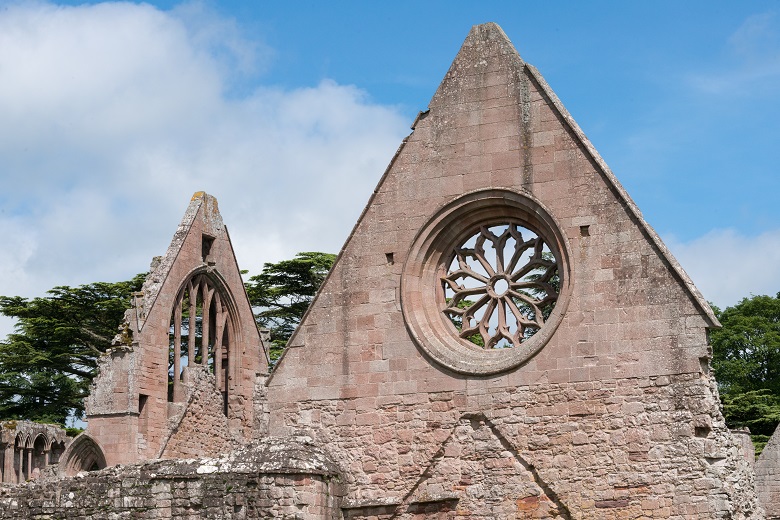 You don’t often see a flat ceiling in a gothic building either. Instead, you’ll see vaulted ceilings like the one in Dunfermline Abbey.

Vaulted ceilings are a feat of structural engineering. They are made of self-supporting arches, which come in different styles called barrel, groin, rib, and fan. A keystone, a wedge-shaped piece of stone, is placed at the top of the arch which makes sure the vaults can bear their own weight. Vaulted ceilings take the weight of a roof and distribute it to the sides, and downwards too. 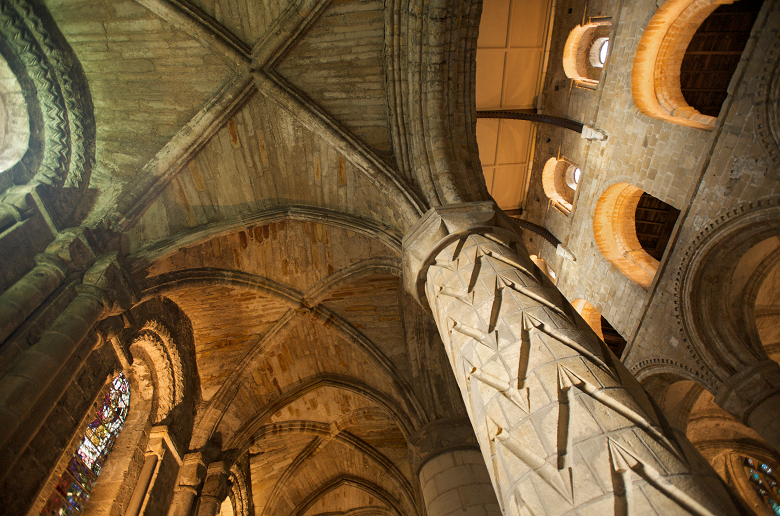 These ceilings are made from either timber or stone, and could be simple constructions, or elaborately painted and textured. St Giles Cathedral in Edinburgh is painted in blue and gold.

You won’t just find vaulted ceilings in churches either. They were often used in lower floors like cellars, and you can see examples of these in several cities, like the Argyle Street Arches in Glasgow. 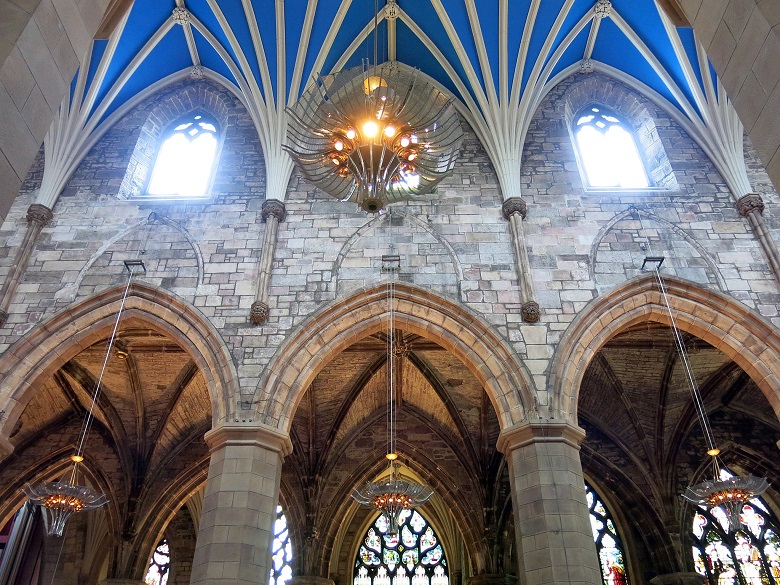 A forest of stone

Gothic buildings were sometimes said to resemble forests. This new style of building in the Medieval period took buildings to new heights – literally.

A technique called the “flying buttress”, which was developed between the classical period and the Middle Ages, became extremely popular in gothic architecture. It is an arch usually found on the outside of a building that goes from the upper part of a wall, down to a lower section – often a lower roofline. 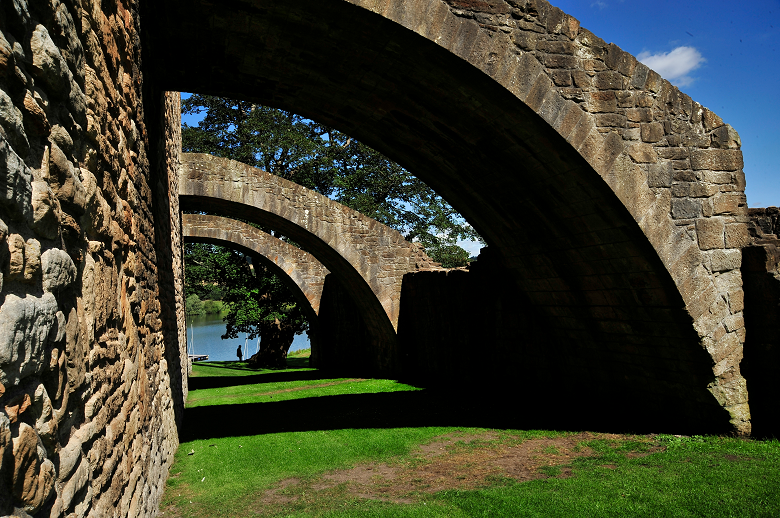 Flying buttresses meant that buildings could be built higher than ever, because they helped to spread the weight. They stop the walls from being pushed outwards by transferring the force to the ground instead. The vertical part of a flying buttress is called a pier, and the arch (the flying part) connects the pier to the wall.

Thanks to the flying buttress, gothic buildings are full of towers and spires reaching incredible heights. The people who built them, like quarrymen, stonemasons and cutters, and plasterers, didn’t have the tools or equipment we use today. They used methods like pulley systems to lift the stones they needed to build towers and spires to the very top.

Share your photos of gothic architecture @HESEngineShed. To learn more about the architecture of Scotland, visit us Monday -Saturday, 10am-4pm.

Discover more about building types and architecture in our publications, and learn about traditional building materials and components with our building advice.